The Western Maryland Rail Trail Supporters (WMRTS) is a non-profit 501(c)(3) organization of volunteers concentrating on continuting the trail for 14 more miles westward from its current terminus at Pearre. The C&O Canal National Historical Park owns this section of the old rail line.

We are striving to raise money from both public and private sectors sources to support completion of the trail as far as Paw Paw.

Penny Pittman, the Maryland Co-Chair of the Western Maryland Rail Trail Supporters was born and raised in Little Orleans and has been the owner of Blue Goose Market since 2010.

She previously owned the very popular Weaver's Restaurant for 21 years where she formed many friendships with elected officials and leaders throughout the state.

She served as President of the Hancock Chamber of Commerce and on the Board of the C&O Canal Trust. She is still very involved in civic affairs in Washington County.


Bert Lustig, the West Virginia Co-Chair of the WMRTS grew up in Plainfield, NJ. He studied and received his PhD degree in Chemistry from the U. of MD in 1973 and moved to Morgan County, WV that same year. Lustig has spent over 25 years as a full time designer/craftsman in wood and his creations have received numerous awards and have been featured in several national woodworking publications.

Lustig currently does woodworking on a commission basis, sells books from his new shop “Berkeley Springs Books” in Berkeley Springs and is a community activist on environmental issues.


Julie Kidwell was born and raised in Morgan County, WV and graduated from Paw Paw High School in 1981. She attended Hagerstown Business College and received an Associate Degree in Accounting. Julie is married and has two children. She is an accomplished photographer and loves recording the diverse landscape of the Eastern Panhandle.

During her tenure as Mayor of Paw Paw, she actively promoted the development of the Western Maryland Rail Trail, other local trails, tourism and preservation of the wild and scenic beauty of her homeland. Julie currently serves as Secretary for the West Virginia Rail Trail Council.


Donald Bowman is a native of Hagerstown and currently resides in Williamsport, MD. In 1959 he founded a very successful trucking company, and currently serves as Chairman of the Board of the Bowman Group. His company has grown to include sales, equipment, leasing, land development, hotel, food and hospitality businesses.

He has held many offices in State and National Trucking Associations and he currently serves on the Boards of numerous civic and financial organizations. His wife and he are avid bicyclists and have five grandchildren.


IN LOVING MEMORY OF MAY "EMMIE" WOODWARD 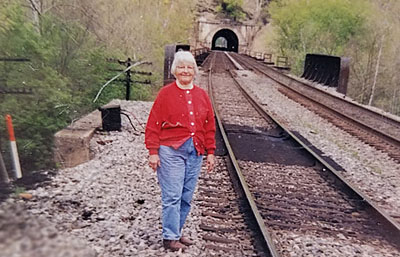 Mary (Emmie) Woodward was an octogenarian, native of West Virginia. She has worked at the CIA, lived abroad, was a housewife and is mother of four children. In midlife she started a nearly 30-year career with fund raising and subscription sales for the National Symphony Orchestra. She loved opera, ballet, and especially hiking in the mountains and along the Potomac River on the C&O Canal towpath.

She was a  member of the C&O Canal Association since the early 1960’s. She previously served on the Federal Advisory Commission for the C&O Canal National Historical Park. Emmie was responsible for promoting the idea of developing the rail trail through the Paw Paw bends during the dark years of CO Canal NHP inaction until the project started to take root in 2004.

Emmie passed away from complications due to cancer in September 2018.